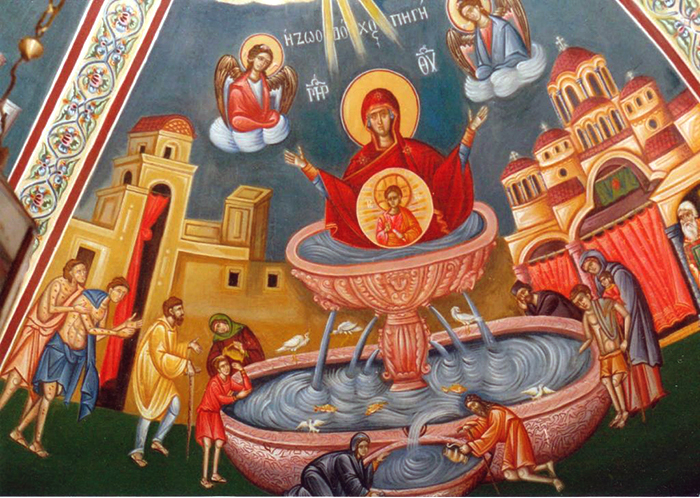 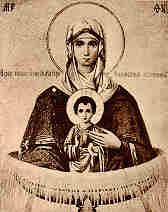 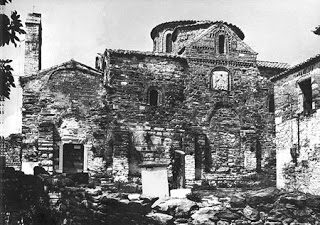 There are two accounts extant concerning the revelation of the Life-Giving Font just outside the City of Constantinople. It is likely that in either case, before the 5th-6th century monastery was erected, a shrine was already in existence with a spring of water, near a grove of trees, and was dedicated to the Theotokos from early times. Over time, the grove had become overgrown and the spring became fetid. 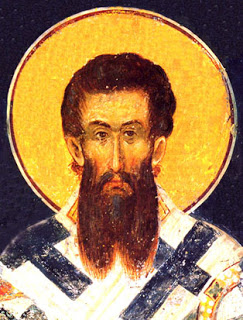 The traditional account is recorded by Nikephoros Kallistos Xanthopoulos, the last of the Greek ecclesiastical historians, who flourished around 1320. This tradition begins with a miracle that occurred involving a soldier named Leo Marcellus, who would later become the Byzantine Emperor Leo I the Thracian (457-474).
While Leo was on his way to Constantinople he encountered a blind man near the Golden Gate who was thirsty. Though he agreed to search for water, he was unable to find any. A female voice was then heard who told the future Emperor that there was water nearby. Looking about, he could see no one, and neither could he see any water. Then he heard the voice again:
“Emperor Leo, go into the deepest part of the woods, and you will find water there. Take some of the cloudy water in your hands and give it to the blind man to drink. Then take the clay and put it on his eyes. Then you shall know who I am.”
The same voice added that she had chosen that very place to be worshiped and prophesied that he would one day receive the crown to the empire. Leo followed her order and at once the blind man recovered his eyesight. After his accession to the throne, the Emperor erected a magnificent church on this place, and the water continued to work miraculous cures. Therefore, it was called “The Life-Giving Spring.”
A second account is given by the prominent Byzantine scholar Procopius of Caesarea. In this version, the Emperor Justinian was out hunting when he came upon a small chapel in a beautiful wooded area, surrounded by a large crowd of people and a priest in front of a spring. Inquiring about this site, he was told that this was the “source of miracles”. He at once ordered that a magnificent church be built there, utilizing materials that had remained after the erection of the Hagia Sophia. The church was erected in the last years of his reign, near the holy spring. After the erection of the sanctuary, the Gate that was situated outside the walls of Theodosius II was named by the Byzantines Gate of the Spring. (Source: https://orthodoxwiki.org/)

In recent years, one copy of the icon began to steam myrrh. You can read more about it here: https://www.pravoslavie.ru/english/89924.htm
Learn more about the church bearing the name of the icon in Istanbul:
https://orthodoxwiki.org/Church_of_the_Life-Giving_Font_of_the_Theotokos_(Istanbul)
Another interesting post on the Holy Icon:
https://www.johnsanidopoulos.com/2014/04/the-panagia-life-giving-spring.html
Various icons of the Life-Giving Spring of the Mother of God: 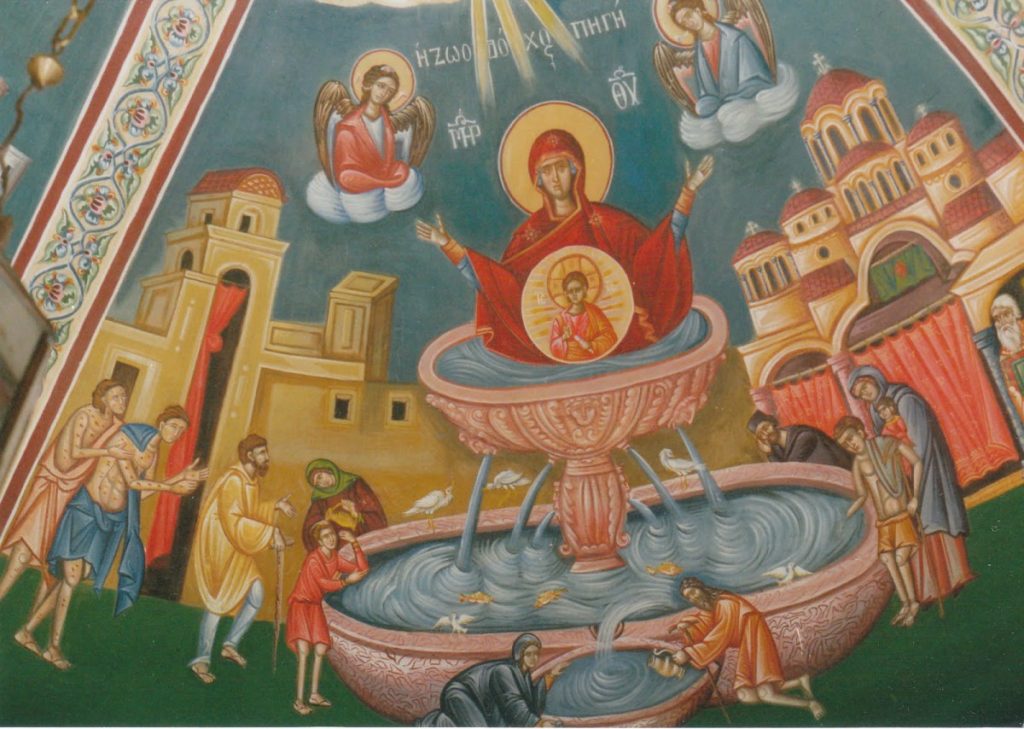 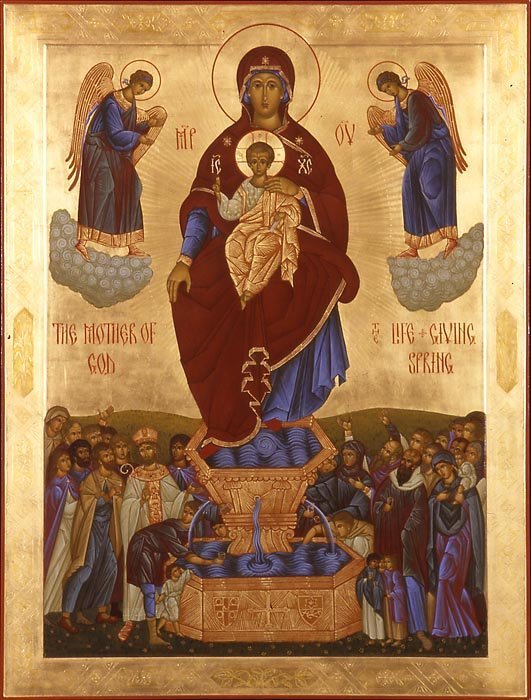 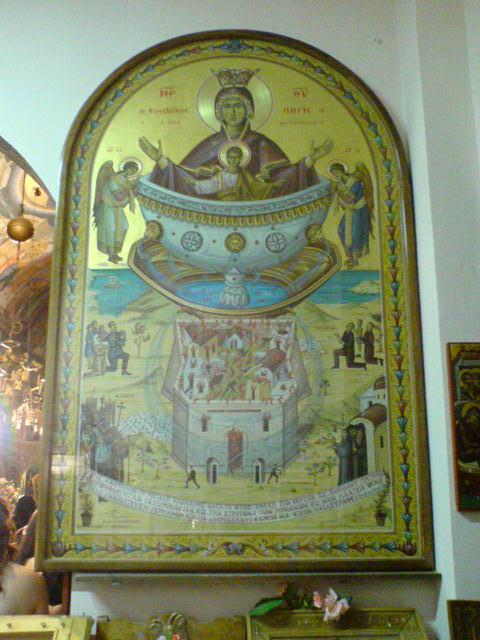 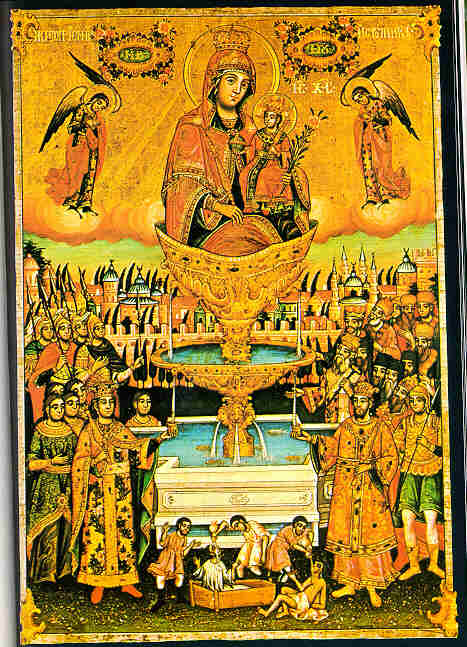 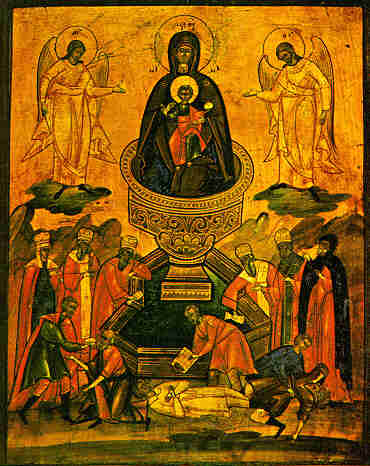 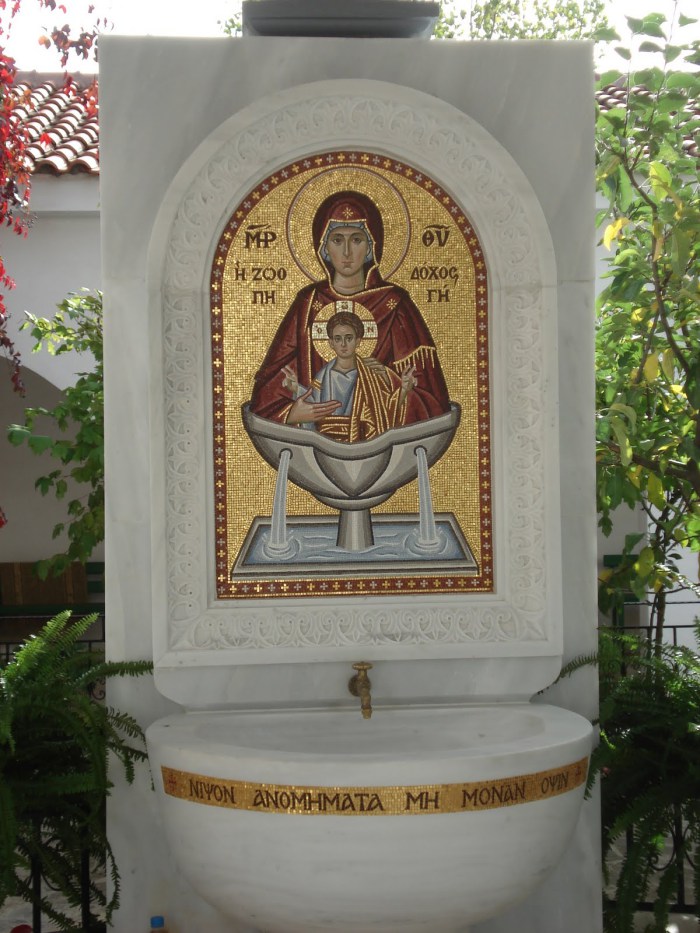 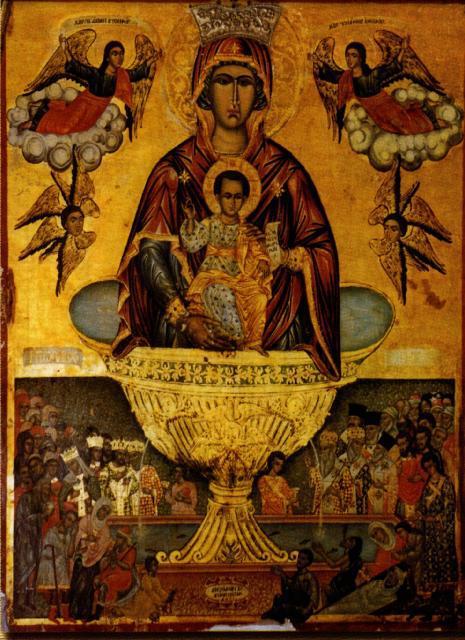 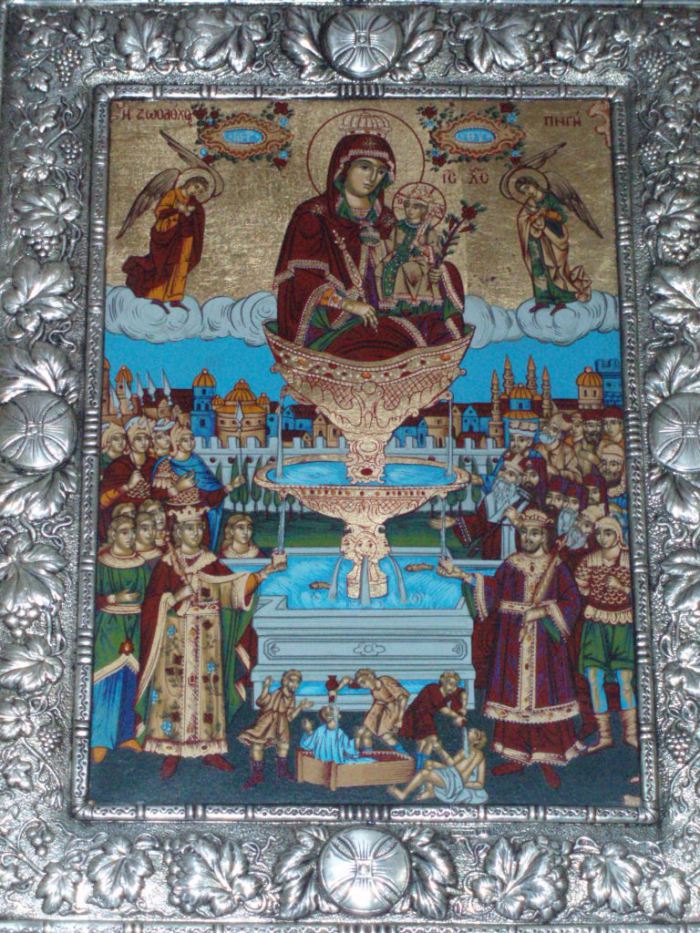 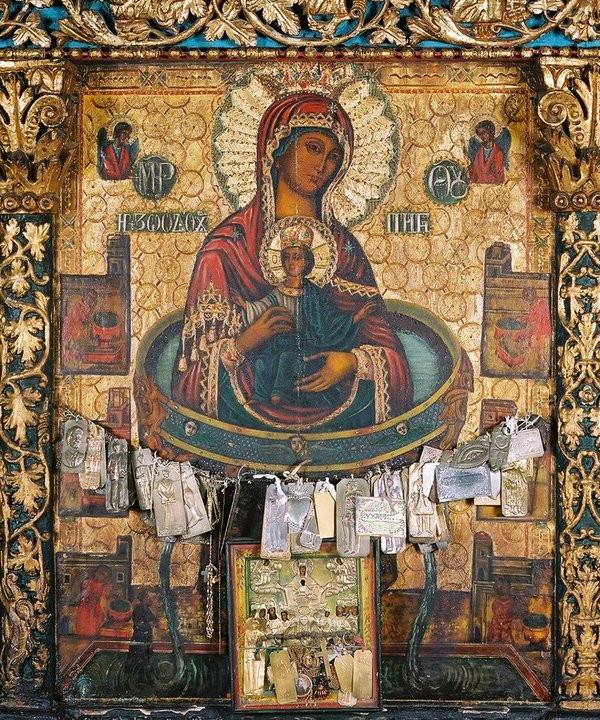 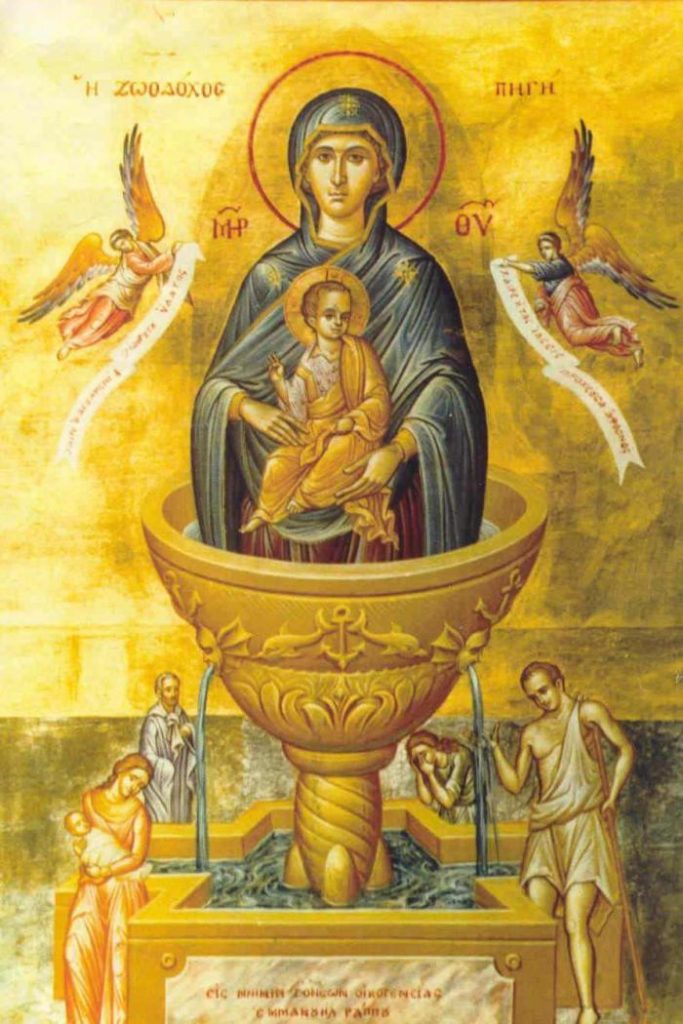 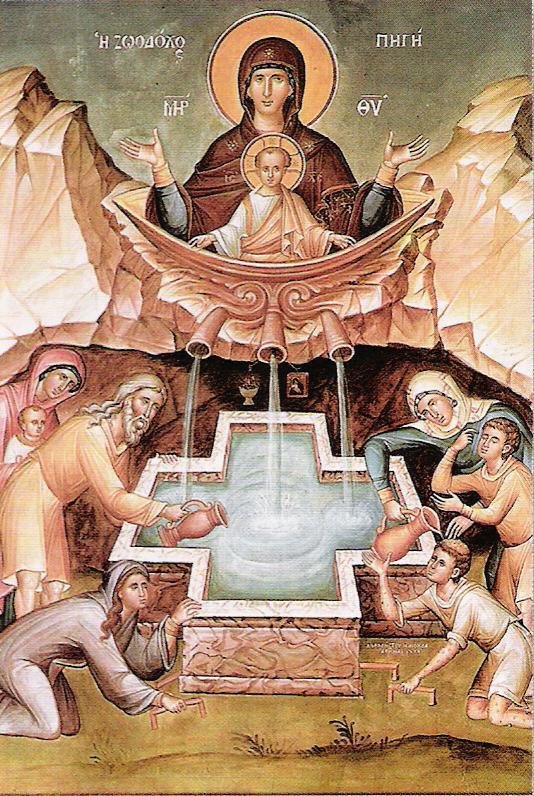 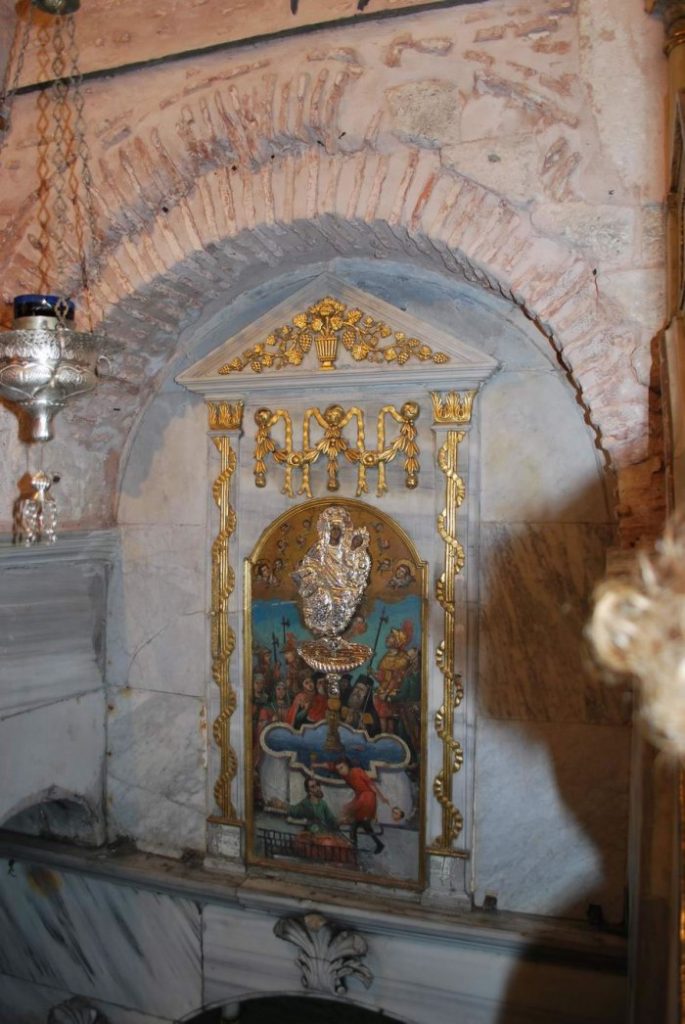 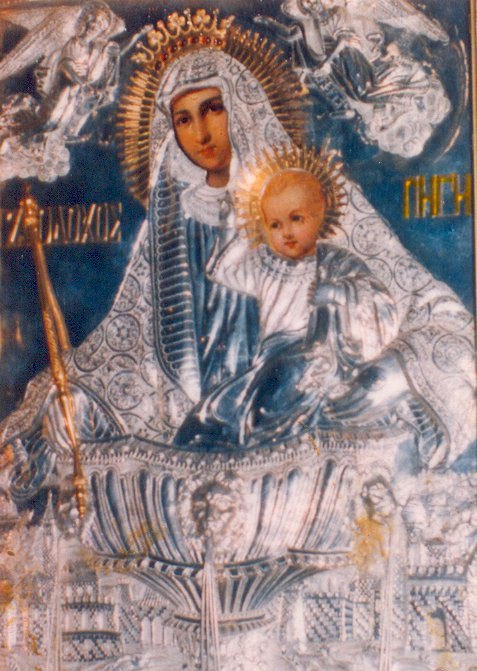 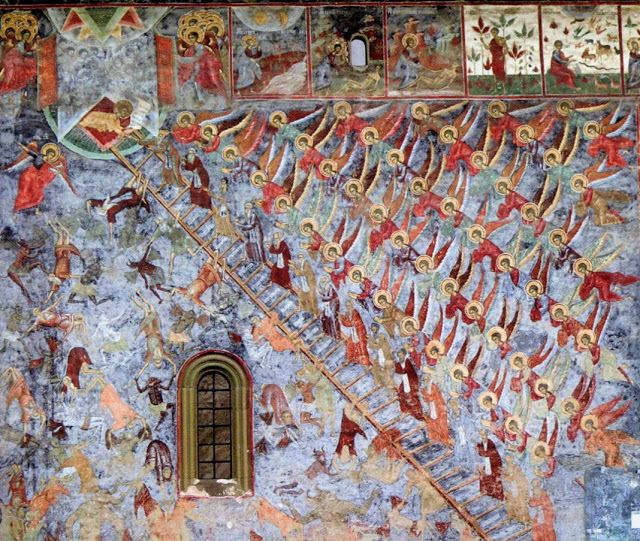