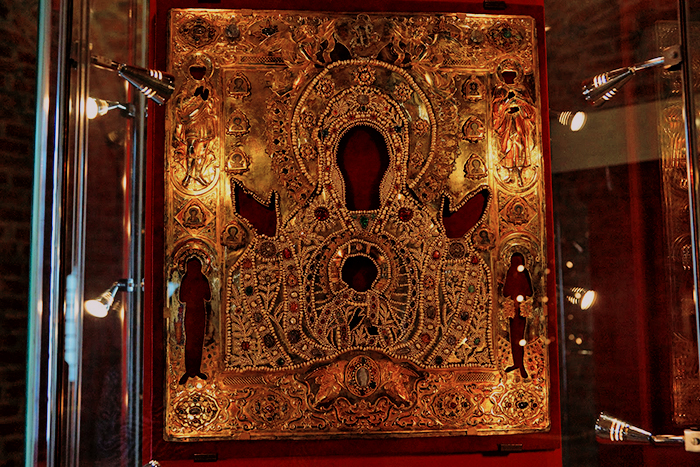 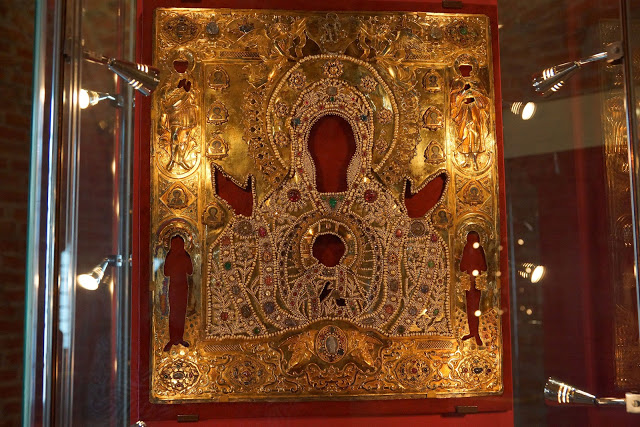 A riza (Ru: риза) is a metal covering for the surface of an icon, usually made from a precious metal. The English word “revetment” is sometimes used, though riza is the most common word used in iconography: even being used to refer to the metal coverings of icons from the Greek-speaking Byzantine Empire, where the practice originated. Why are icons covered?
The two Russian words used for these metal coverings – riza (риза) and oklad (оклад) – give the answer:
– Riza means “robe”, and so it can be said that the covering is decorative, and used as a way to honour the icon. No one could look at a riza-covered icon and imagine it not to be an item precious to the person that possesses it.
– Oklad means “covered”, and this word reveals the fundamentally practical reason for covering icons. They are used to help protect the painted surface of the icons from blackening caused by the soot and smoke from vigil lamps, candles, and incense used during church services.
And so a riza is used both for venerating an icon, and protecting the icon from damage caused by veneration. 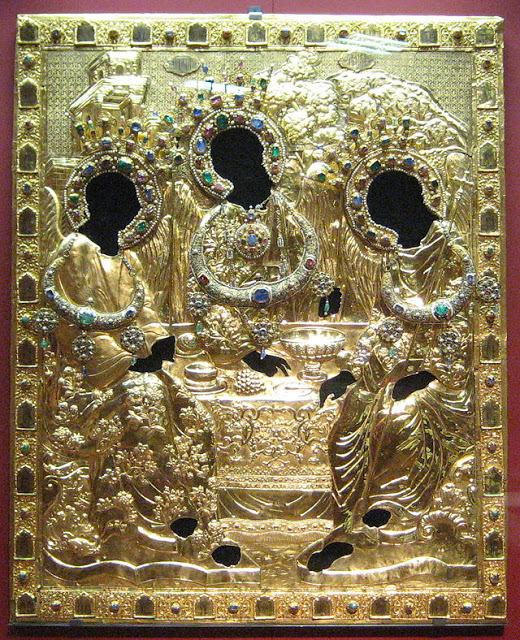 The riza shown above was made for Andrei Rublev’s famous Icon of the Holy Trinity (the uncovered icon, as it appears today, is shown on the left. The riza covered the icon completely except for the angels’ faces, hands, and feet, and was reworked several times: the earliest elements (the frame, background, figurative plaques, and precious stone cabochons) The original was a gift of Tsar Boris Godunov in 1599–1600, and consisted of the frame, background, figurative plaques, and precious stone haloes. The angel in the centre wears  pendant that was a gift of Tsarevich Feodor, embellished with pearls and precious stones framing a re-used Byzantine sapphire cameo of Christ Pantocrator, originally from the 10th century (difficult to see at this resolution, but just about visible). The three crescent-shaped necklaces attached to the haloes were added by Tsar Michael I Romanov in 1626. Later details were embossed in 1754 by Moscow silversmith Ivan Grigoriev, at the monastery’s expense. The original covering, as well as the later embellishments, appear as though the main reason for adding it was in order to honour the icon (and therefore the prototype: the Holy Trinity). In this way, the riza could be seen as a form of votive offering.
A distinctive feature of some icons are tiny holes, regularly-spaced along the haloes and elsewhere, giving the impression of an attack by extremely organized woodworm. These are caused when the riza is removed from an icon, leaving behind holes where the metal was attached to the wood. Indeed, Rublev’s Icon of the Trinity shows evidence of small holes where the revetment once was. For this, and other reasons, not everyone likes the covering of icons with rizas.
Certainly the Holy Trinity icon by Rublev is best-known and loved as it is now, in its original and uncovered form. However, it could be argued that without covering it up at the beginning of the 17th century, this medieval icon would never have survived up until today in such good condition. The profoundly powerful image of the Holy Trinity was created by Rublev during dark times in Russia’s history, and so acted as abeacon to the faithful. It was covered during a time of general piety in Russia, when Christian spirituality flourished throughout the Russian Empire. The “uncovering” of the icon, along with other icons inspired by Rublev’s simple, faith-filled, style, occurred at the beginning of the 20th century, arguably a time when the world entered new “dark” and turbulent times. These icons “shone forth” again at just the right time, shining all the brighter in contrast with the surrounding shadows. We live in times when these icons still shine brightly, and still need to. But they can only do this because they were hidden beneath gilt metal rizas in the previous centuries of external peace and prosperity. 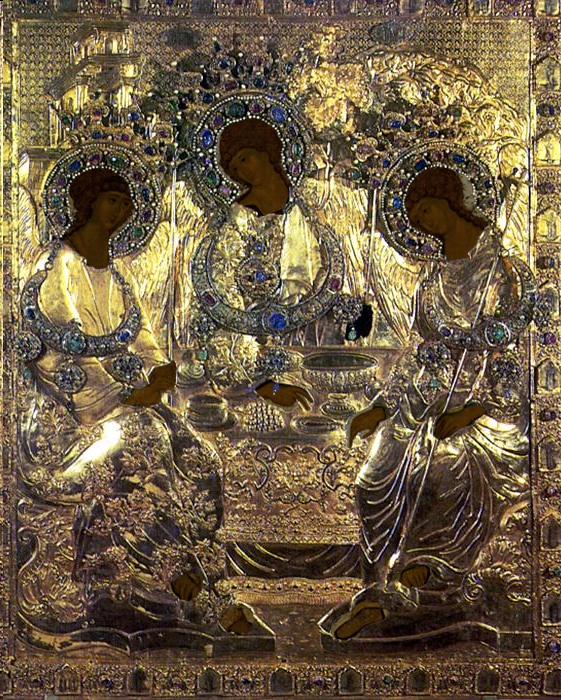 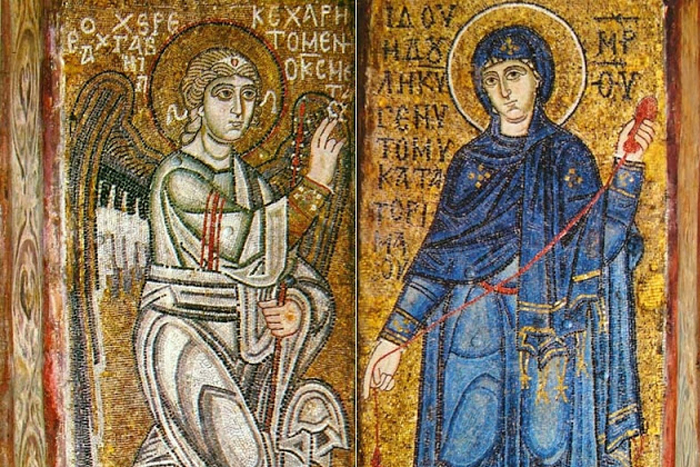 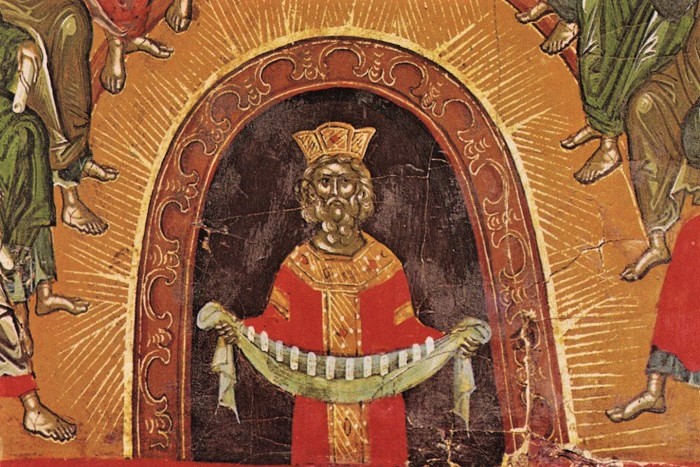 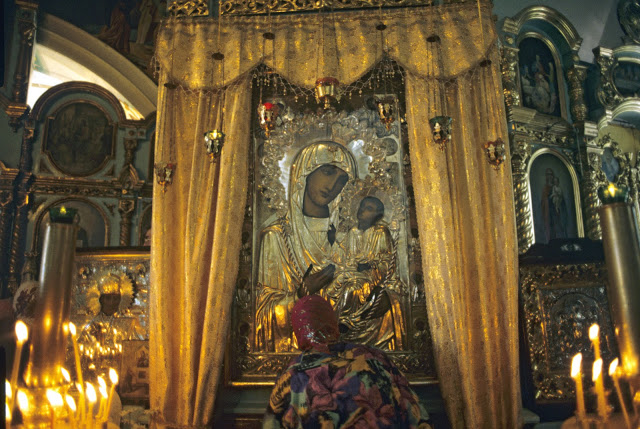