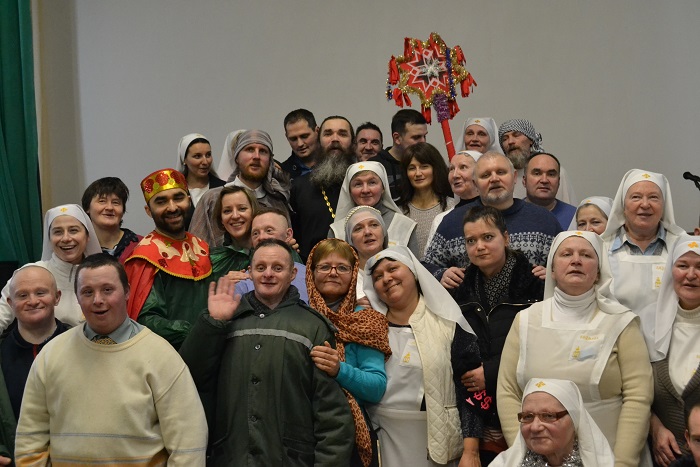 People of all cultures and walks of life mark certain days as special. Usually, the special days are called holidays. For instance, Christians are waiting for the Nativity of Christ in winter and Easter, the Resurrection of Christ, in spring. Does anyone consider the ordinary Thursdays or Fridays as special days? We simply know that there’s going to be a Thursday or a Friday, and it doesn’t make those days special.

However, the patients who live in the Boarding Home No.3 for the mentally challenged in Novinki do consider Thursdays and Fridays special. These are the days when the Convent comes to them. Our sisters sing Akathist in the Boarding Home every Thursday and celebrate the Divine Liturgy every Friday. The patients are happy to have the opportunity to talk with the sisters about things that interest them. They invariably ask the sisters when the new performance is going to be, although the latest one was staged just days ago. 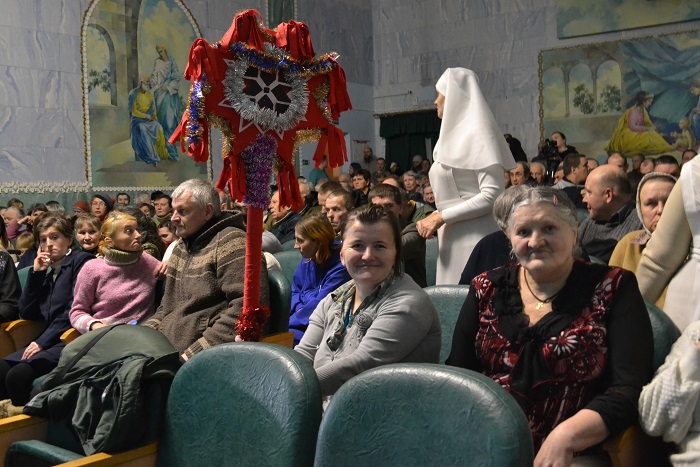 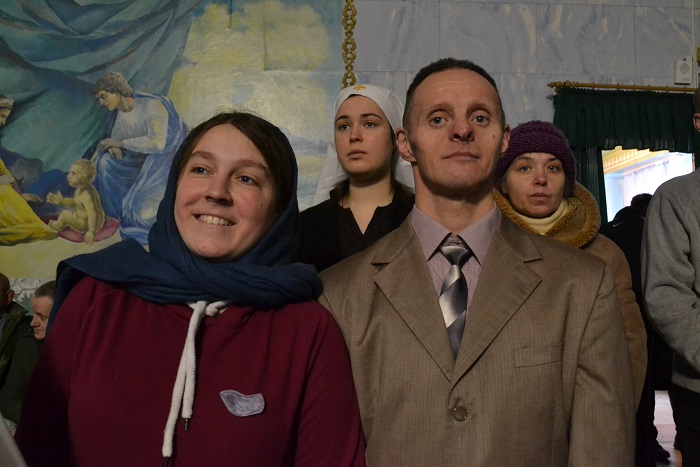 …The actors are whispering behind the curtains. They are anxious. They repeat their script and adjust their costumes. The corridor behind the stage is quiet. There are Pasha and Roma from the boarding home here. They are going to play Herod’s guards. Pasha doesn’t have any stage fright at all because he takes part in the local The Joyful Hearts ensemble, so he’s used to performing. When you stand behind the stage, it may appear to you that it is them who preserve peace in the whole boarding home. Naturally, these guys love the Nativity of Christ. “We’re Orthodox, aren’t we?” the two guys say. When asked about Christmas gifts, they change the topic. They say that they pray for all people, for everyone’s health and wellbeing. Simple words that hide a profound perception of the world… 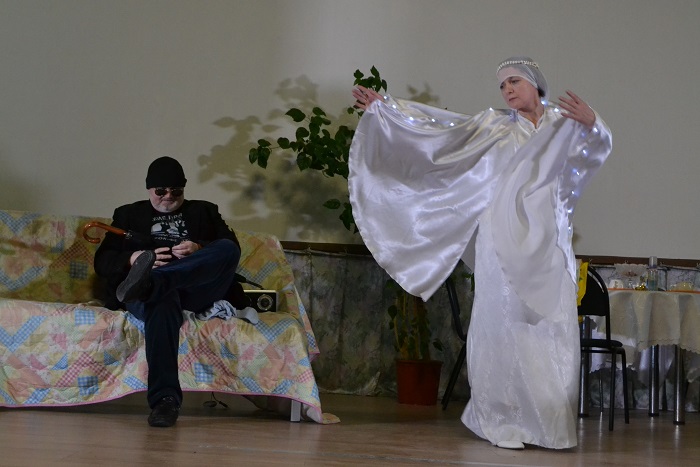 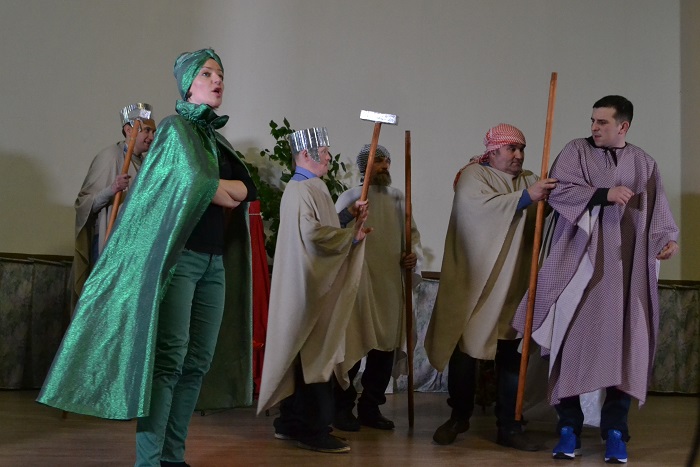 Saints have said quite a lot about the ills of theatrical art and about entertainment and fun that distracts Christians from godly living. What if the drama performance is about Christ, the actors are amateurs, and the audience consists of their friends? What if we distract the spectators from their usual daily routines and offer them a chance to stop and reconsider their lives? What if we let the audience think about God and the eternity and to view the reality from a different angle? Brother Oleg Shust who played one of the major parts claims that the play applies to each one of us because we all have to choose good or evil.

The ministry in the Boarding Home has been the preferred way for Sister Helena Turkova to do good since she turned to the faith. Helena has been visiting this boarding home for more than a decade, and she has been involved in drama performances here for eight years. This time, the residents of the unit that she attends – the ninth unit, which is considered one of the most difficult ones – sat near the stage in their wheelchairs. The part that Sr. Helena played this year was a combined representation of the Three Wise Men coming to the Bethlehem Cave to worship the Incarnate Lord Jesus Christ.

When the performance was over, someone sang an old song about white roses, then another song, from an old movie titled I’ve Met a Girl. Someone was breakdancing near the Christmas tree to the rhythm of carols. That’s what improvisation means.

Even if someone was neither singing nor dancing, they were still happy inside. 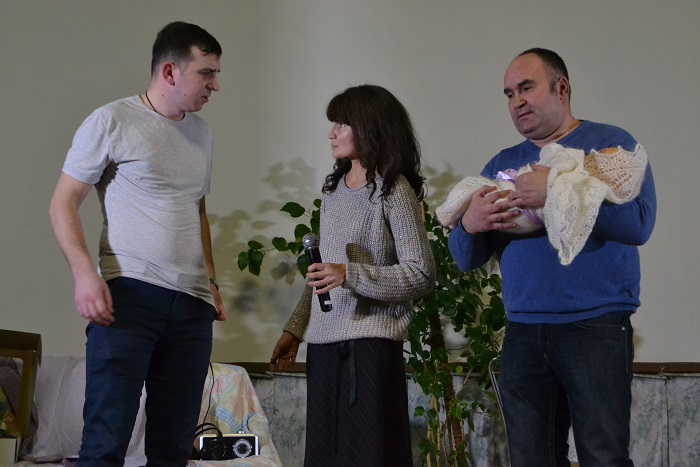 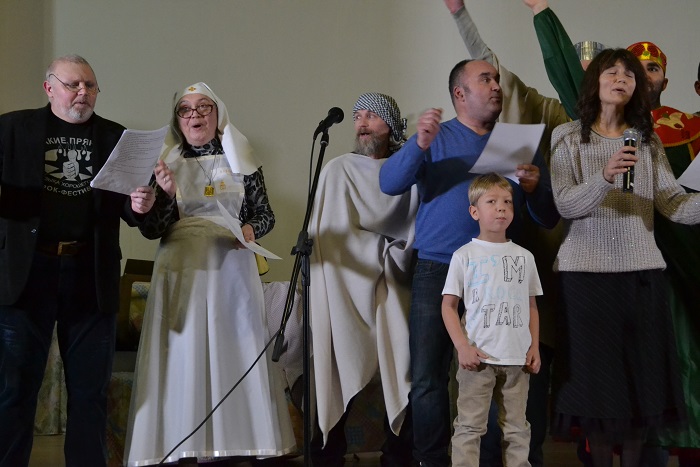 Human interaction makes people happy. Many people can communicate simultaneously via theatrical performances and songs. They can communicate directly, face-to-face, too. It’s great to have someone who can listen to what you have to say. You suddenly realize that there is someone who cares about you. The residents of the Boarding Home often compare the sisters of mercy with mothers. There are forty “mothers”, i.e., sisters who wear white robes, and ten “fathers”, i.e., lay brothers, for 700 residents of the Boarding Home. The Boarding Home has become their second home. How does the Lord lead people to do this ministry?

Sister Tamara Kazachenok says, “You know, when I first came to the Boarding Home many years ago, I heard the Hymn to the Theotokos immediately! The boys were in suits and bowties, while the girls were in gray dresses. They were The Joyful Hearts ensemble.” In general, Sister Tamara regards her ministry as a vocation. Even when she was a child, she used to help those in need. “My mom used to say that I wouldn’t be able to take care of the entire world. I became a nurse, then a special education teacher, and went on to work in specialized facilities. I became a sister of mercy when I turned to God. Currently, I teach God’s Law in the Sunday School of St. Elisabeth Convent and teach the residents of the Boarding Home the basics of literacy, arithmetic, and drawing.

Helena Batura is in charge of the Convent’s ministry in this Boarding Home. She admits that she had never dreamed of the honor of wearing the white robe because she thought that she didn’t deserve it. Nowadays, she wears the white robe and is even more keenly aware of the responsibilities it entails. The fact that her husband, Igor, carries out the same obedience, makes it easier. They visit the Boarding Home together and work hand in hand. When asked which of their duties is the most important, they reply that each task is critical: “We don’t have top-priority and less-important tasks. How can you assign priorities to the patron saint’s day, Christmas, a pilgrimage to the shrine of Saint Valentina (St. Valentina of Minsk was canonized by the Synod of the Belarusian Orthodox Church in 2006 – the author’s note), a procession, or an akathist? Everything is equally important.” 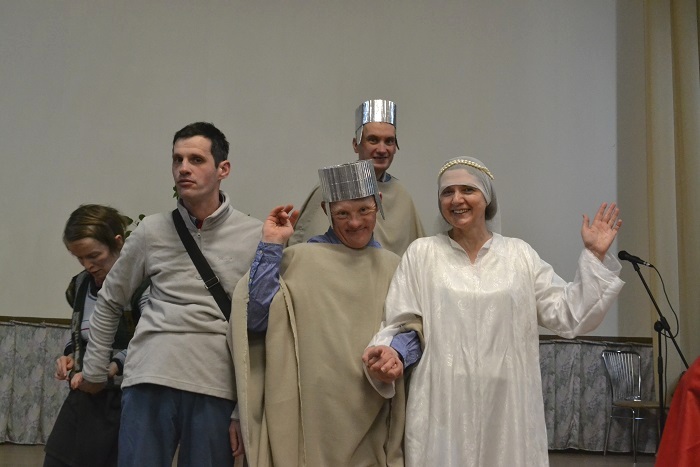 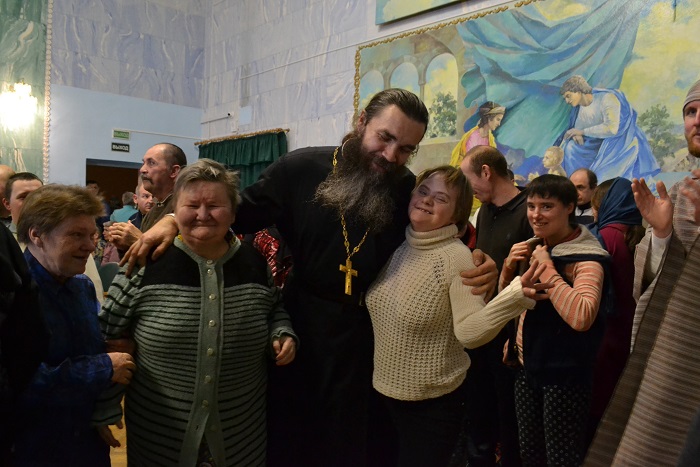 Maria Dziubenko teaches painting classes to the residents of the Boarding Home every Thursday. Katya, a girl from the Boarding Home, tells her about angels at the same time. It was thanks to Katya that Maria became a sister of mercy three years ago. She admits that there are various situations and that it’s difficult to interact with the people who live in the Boarding Home sometimes but they aren’t deceitful, and that’s one of the reasons why Maria is here.

The performance is over. The day comes to an end, and all the residents of the Boarding Home go back to their wards. However, the anticipation of the next Thursday and Friday – those special and happy days – will glow in the hearts of many of these people. That’s when they’ll be able to ask about the date of the next performance again. 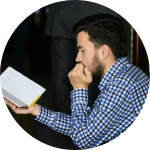 The Senior Brother
at  the Catalog of Good Deeds 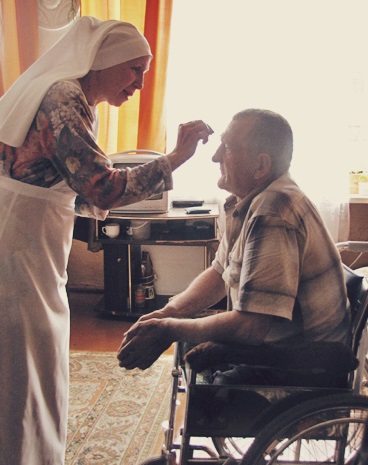 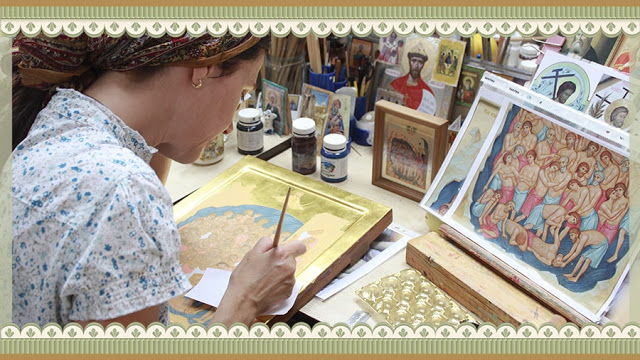