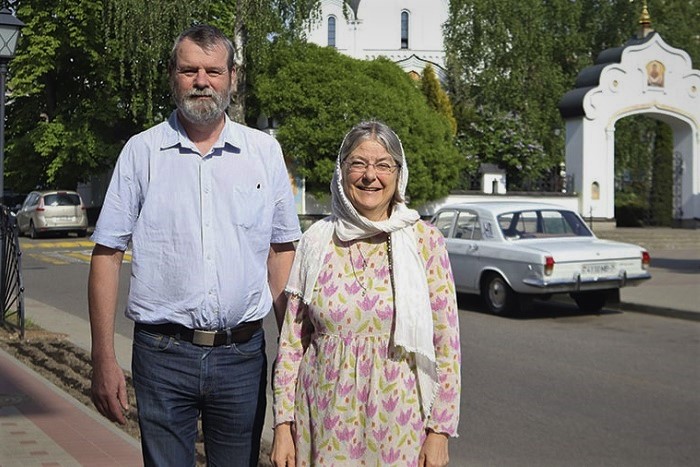 We met Elizabeth Wingård and her husband Basilius in Ikhvis School where they assisted in teaching English to our students. They came to us from Sweden. Their stay in the Convent was filled with various activities, corresponding to their usual active and open lifestyle.

“Basil,” the man stretched out his hand as he introduced himself by his baptismal name. His wife is Orthodox, too. Her baptismal name is Elizabeth.

Children were passing by and greeting the couple as if they were intimate friends. Our interview with Elizabeth and Basilius started with the accompaniment of children’s voices singing Christ is risen from the dead…

Trampling down death by death and unto those in the tombs bestowing life, Elizabeth sang along. 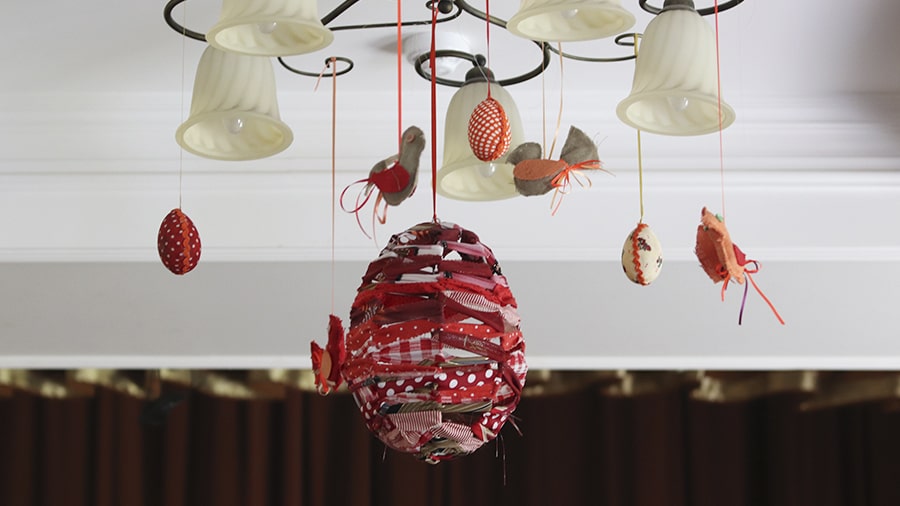 What is the liturgical language in Orthodox parishes in Sweden?

Basilius: They pray in Swedish in most cases.

Elizabeth: Parishes are multiethnic, so we read and sing litanies and many other prayers in various languages.

As far as I know, the Orthodoxy in your country is represented by various churches. Is there a Swedish Orthodox Church?

Basilius: There is the Metropolitanate of Sweden, which is affiliated to the Ecumenical Patriarchate. There are also parishes of Moscow, Romanian, Serbian, and Antiochian Patriarchates. 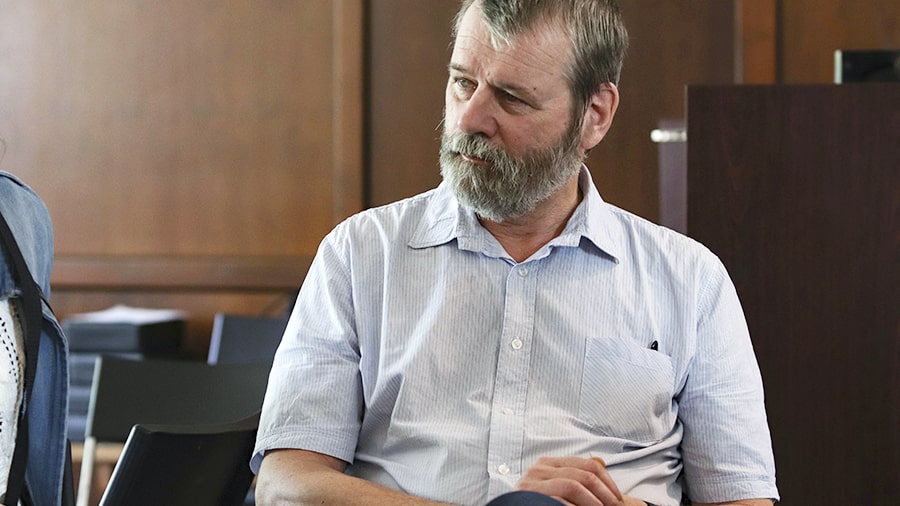 Elizabeth: Serbian Orthodox Church has the largest presence in Sweden. The parish that is the closest to our house and the one we go to also belongs to the Serbian Church. It depends on how the parish was founded and which ethnic groups prevail among its parishioners. Not all Orthodox parishes have their own church building. They can rent Lutheran churches and worship there, too.

Are there many Orthodox among ethnic Swedes?

Elizabeth: There are about thirty Swedes in our St Demetrius Parish in Kristianstad. The amount of time that they’ve been Orthodox varies. The number of ethnic Swedes in our parish is considered large and can be attributed to the fact that there have been Swedish priests in our parish for forty years. 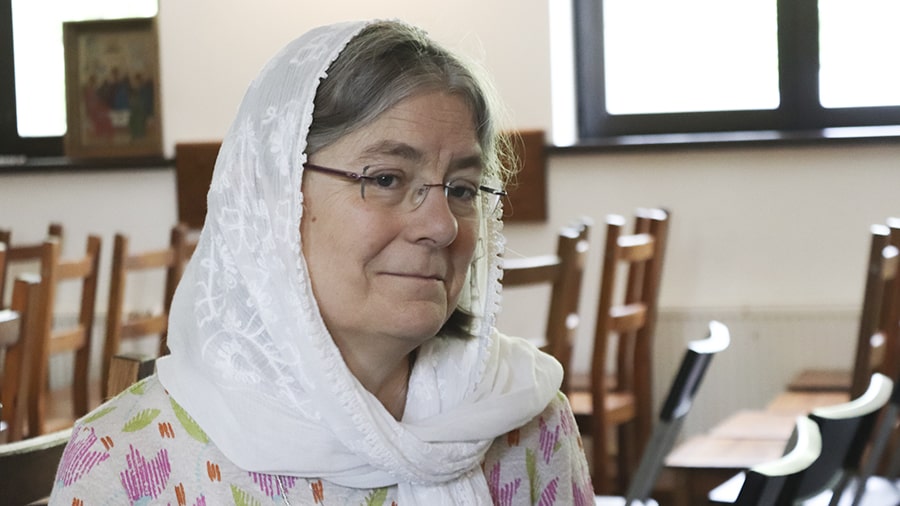 Why did you decide to convert to Orthodoxy?

Elizabeth: I had been a deaconess in the Lutheran Church for twenty-five years, which over time led me to see that people in my parish valued human freedom more than God. They began relying on people rather than God.

The concept of holiness came as a revelation to me. The Lord is holy! Everything in the Orthodox Church points at holiness. I was pretty impressed by that.

Isn’t there holiness in the Lutheran Church?

Elizabeth: There used to be holiness in the Lutheran Church but there was less and less of it over time. It went down to people pleasing people. As a deaconess, I had to teach the concept of holiness to the flock. It was becoming harder and harder to do because this concept was disappearing from the Church.

So it wasn’t challenging for you to leave your parish, your congregation, and convert to the Orthodoxy, was it?

Elizabeth: No, it wasn’t. Year after year, I was getting more and more disappointed with the lack of holiness in the Lutheran Church. When I became Orthodox, I could feel the fullness of faith and found answers to many questions. 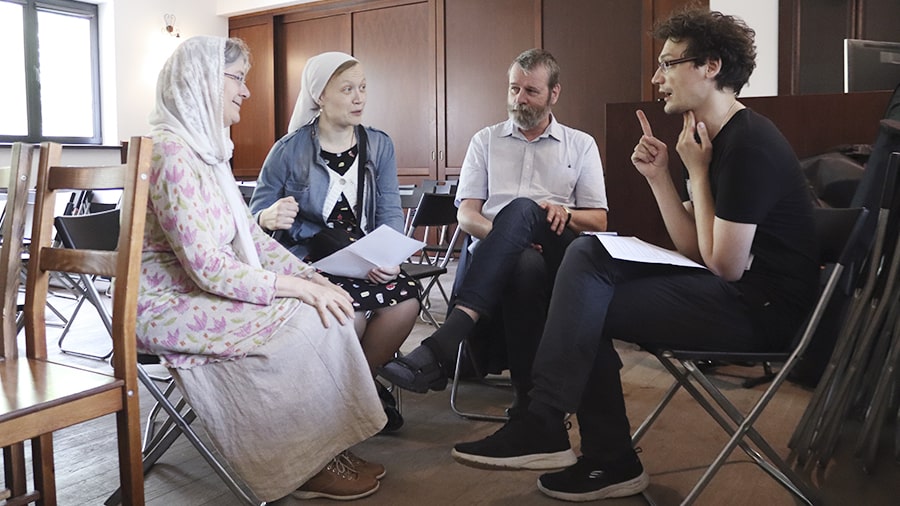 When and how did you learn about the Orthodox faith?

Elizabeth: I heard about the Orthodox Church when I was young. My father was a Lutheran, too. One day, he read to me a story about a man who went on pilgrimages to a lot of holy places. That story remained in my memory. Then I met Basilius. He was a volunteer at church and helped me a lot. In addition, he was interested in Russian culture and Orthodoxy. We espoused similar questions and doubts. First, we went to a Catholic church located nearby. Nevertheless, it was in the Orthodox Church that we managed to have our questions answered. 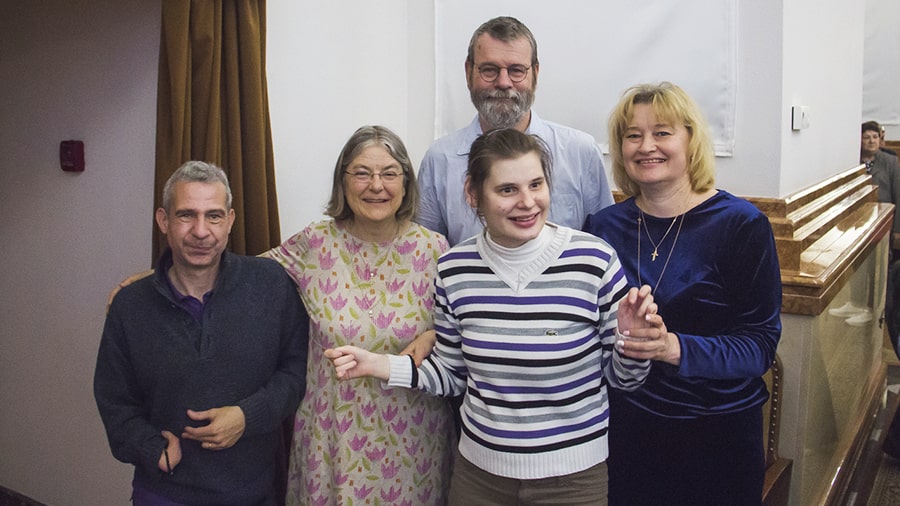 Basilius: We went to an Orthodox parish located 200 km from our home town. Elizabeth started singing in the choir of that parish, and it didn’t take us long to realise that we wanted to become Orthodox.

Elizabeth: Our spiritual search took more than a year. We got to know an Orthodox priest, Father Tikhon, and we asked him for advice. He told us that we had to go to Liturgies at church so we started going to church often.

Basilius: Father Tikhon took care of us, like a real father. 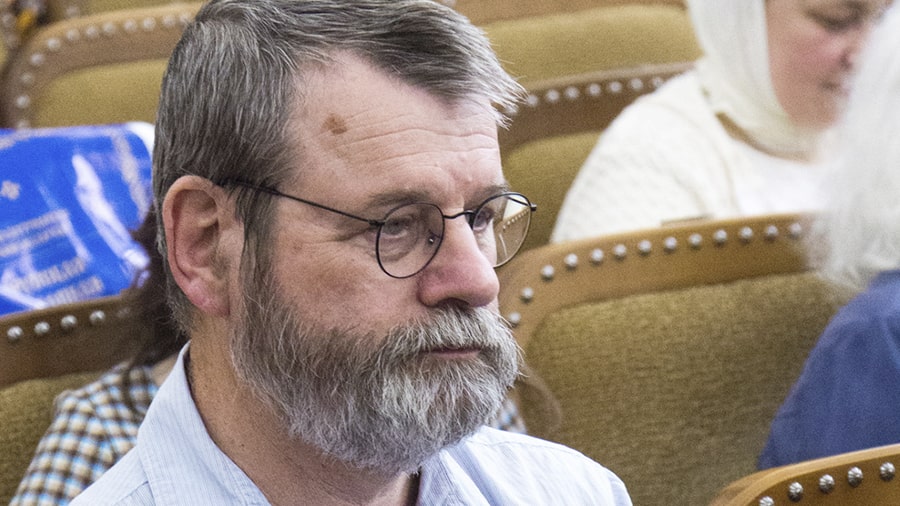 Elizabeth: We became Orthodox on the eve of the Great Lent. Our first day as the Orthodox was the first day of Lent. Imagine that? (Laughs).  The Lent went fine because if you want something badly and keep looking for it, you’ll get it in the end.

I read that Swedes honour rules, so if they fast, they do it seriously…

Elizabeth: We were working really hard. Sure, we had failures but we repented of them and went on working.

I bet not only your inner life changed but your social and domestic life had to change as well. For instance, you put icons at home. How do your children react to your becoming Orthodox?

Elizabeth: Yes, we’ve got quite a few icons at home. They didn’t damage our relationships with our children. They are Christians, after all. They react positively to our decision to convert to Orthodoxy and respect our choice but they go on with their own lives. They support us in a number of cases. I hope that when we pass away, our children will remember how we spent our lives as Orthodox Christians. I pray that they could view our life as an example for themselves. 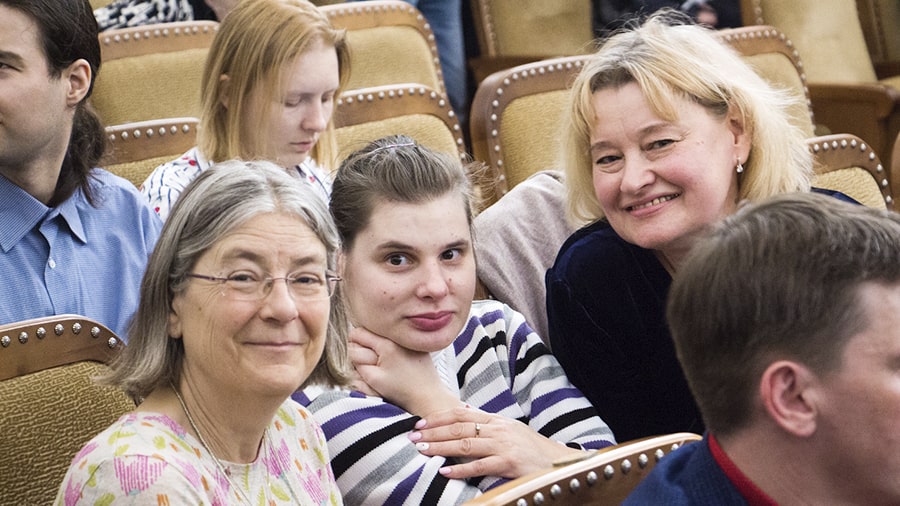 Is it hard to be Orthodox in Sweden? Did your  new faith turn you into some kind of black sheep?

Elizabeth: No, nothing has changed in our relationships with people. We continue to meet our old friends as often as we used to. We haven’t felt anything out of the ordinary because Orthodoxy is the real deal… Well, with the sole exception of the fact that our friends don’t ask us about Orthodoxy any more.

Elizabeth: They must be afraid of something. Perhaps, if they learn the truth, it will challenge their lifestyles.

Basilius: Many friends understand us pretty well. They dislike the current situation in the Lutheran Church, too. Some of our friends approve of our choice.

You know, when I became Orthodox, I was surprised to discover that, although it is impossible to comprehend God, we have commandments, which we should follow even though we cannot grasp God in his entirety. 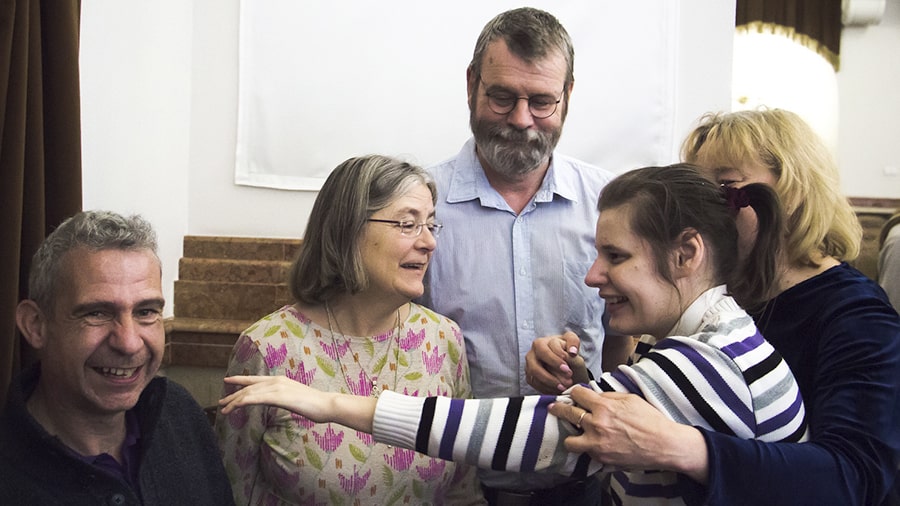 Elizabeth: Indeed, things worked differently in the past. It was much better. All of my friends are Lutherans. I liked to be in the Lutheran Church but later I realised that we think of God differently.

It was stunning to realise that we live in a world where Orthodoxy is widespread, especially in Europe. We share the planet with millions of Orthodox believers. I feel that we are part of the history that unfolds right now.

Lutherans talk about traditions as things of the past, which have no bearing on today. Well, I used to think of it differently, in fact.

I know that you do your best to support our Convent. In spite of the distance between our countries, you’ve visited our Convent a number of times…

Elizabeth: Your Convent is like paradise on earth for us. Attending services in your Convent and being able to see everything that happens here is like living in heaven. That’s our impression of this holy place. 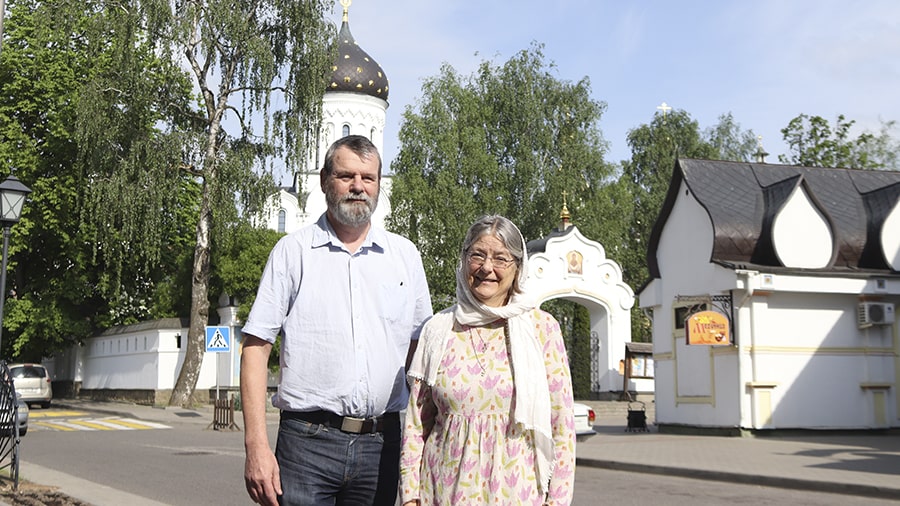 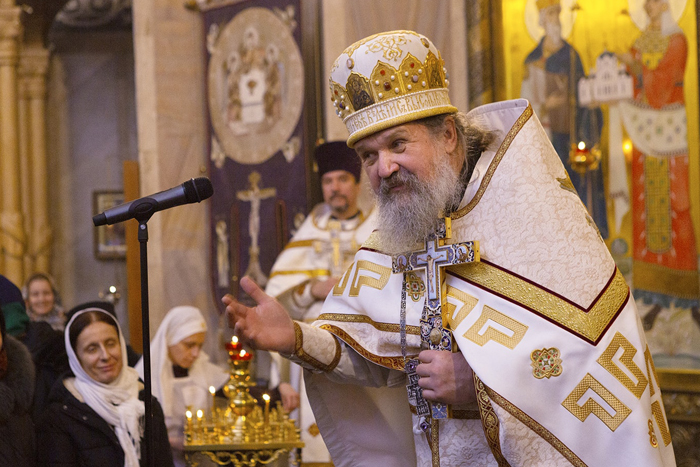 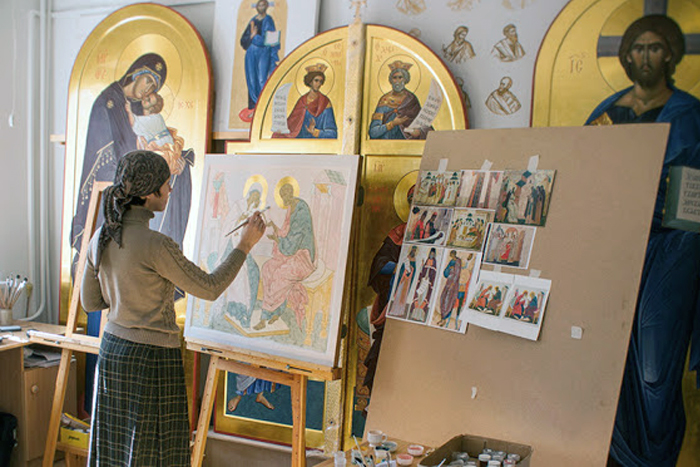 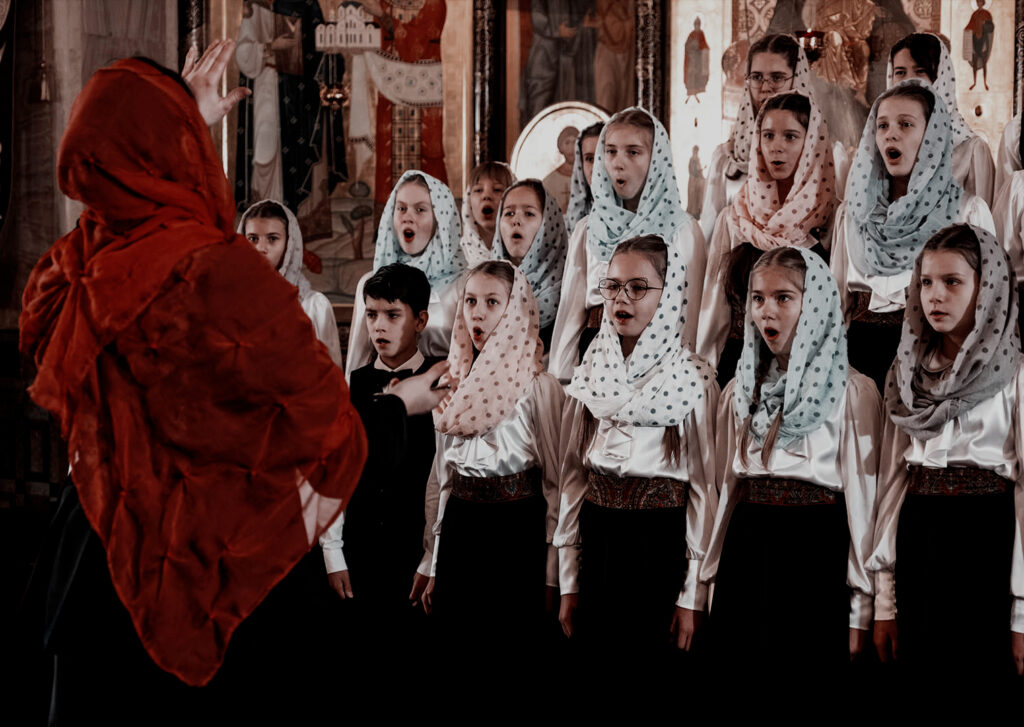