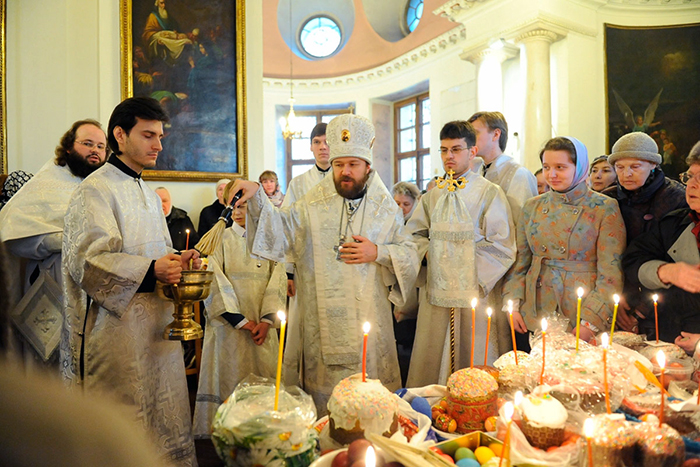 One of the most beautiful divine services is the Holy Saturday Vespers, combined with the Liturgy of St. Basil the Great. One often hears from priests that this service is already an Easter service, that we are already rejoicing in Jesus Christ the Risen One, but we do not shout about it yet to the whole world. Why is that? How was this service celebrated during the development of the Orthodox worship?

Typikon of the Great Church. According to the Typikon of the Great Church, Holy Saturday Vespers has an unusually large number of paremias, during which the Patriarch of Constantinople baptized those who had been catechized. During the Second Paremia, the Patriarch, leaving the Gospel in his place, went from the Cathedral to the baptistery, where he put on white robe and shoes. All catechetical rituals (denial of Satan, profession of faith, etc.) had already been performed during the Lent and the Holy Week; therefore he blessed only water and oil, and then the baptismal water and the catechumens were anointed with the “oil of joy”. The patriarch would only anoint with oil the heads of the catechumens, and then deacons and deaconesses would rub it all over the body of men and women respectively. After the baptism, everyone returned to the cathedral, where the chrismation took place (Alexei A. Dmitrievsky. The Most Ancient Patriarchal Typikons: Typikons of the Holy Sepulchre of Jerusalem and the Great Church of Constantinople). The first seven paremias were obligatory for reading, and if the baptism was delayed, they added seven more paremias.

The Easter on the Saturday. The final, fifteenth, paremia was never omitted and was especially important: its closing song was chanted as a greeting of the entire congregation to the new members of the Church who arrived at the church. It also served as a sign for the ministers to put on white garments. When the song ended, singers began singing For as many of you as have been baptized into Christ, and the anointing was performed. During the singing of Psalm 32 (Blessed is he whose transgression is forgiven) the bishop with the baptized entered the cathedral, and there was the Little Entrance, opening the Easter Liturgy of St. Basil the Great. Thus, the celebration of Easter started in the evening with the Divine Liturgy, which is fair, because according to the Typikon, the day begins with Vespers.

The Easter character of the Holy Saturday Vespers can be seen literally in all its aspects. The Sunday Octoechos verses are sung; all fifteen paremias are dedicated to the Resurrection and the Kingdom of God revealed by the Resurrection. The baptismal Epistle is read, because it is in the Sacrament of Baptism that believers gain the experience of resurrection and the fruit of the triumph over death, when we are buried with him by baptism into death: that like as Christ was raised up from the dead by the glory of the Father, even so we also should walk in newness of life (Romans 6:4). The Gospel reading previously consisted of two parts: the baptismal one, for the sake of those who were baptized, and the Easter one, containing the full story of the Resurrection of Christ (Matthew 28:1-20), which can be heard only once a year during this service. Why is it that the ancient Easter Vigil service of the Holy Saturday ceased to be perceived by believers as an Easter service? The answer to this may be the development of the liturgical life in the Mother of All Churches – the Church of Jerusalem.

Double Liturgy. A unique custom arose in Jerusalem in the 4th century: the bishop and several clergymen would walk to the Holy Sepulchre and serve another liturgy there after Holy Saturday Vespers and the Easter Liturgy in the Basilica. It was done in order to honor the sacred place of the Holy Sepulchre with the celebration of the Eucharist. This was the unique tradition of serving two Easter liturgies on the same day, the first of which was the Easter Liturgy proper and was considered to be the main one (G. Bertoniere. Easter Vigil in the Eastern Church). Over the years, this tradition was accepted by the entire Eastern Church, and the second Liturgy was enriched with new hymns, in particular with the beautiful Easter canon of St. John of Damascus. The Holy Saturday Vespers gradually moved to the Saturday morning, and the main focus was on Easter Matins and the Liturgy of St. John Chrysostom.

So, it is Holy Saturday Vespers in conjunction with the solemn Liturgy of St. Basil that is both historically and practically the first Easter service that brings Christians the joy of the Risen Christ. The Typikon of the Orthodox Church still prescribes this service to be held two hours before sunset and that is how it is still celebrated in the Church of the Holy Sepulchre. The custom of blessing Easter food, including the non-Lenten foods, after the service of the Holy Saturday is also indicative of those times when Lent was over in the evening of the Holy Saturday. By learning how these most beautiful services of the year evolved, we discover the secret of a few of their liturgical features, which will allow us to participate in the celebration of Christ’s victory over death in an even more meaningful and conscious way. 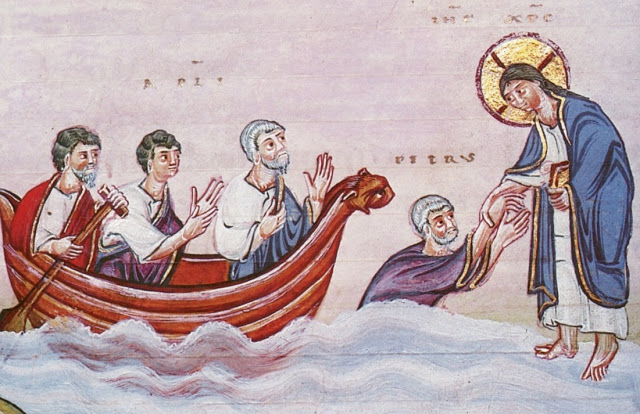 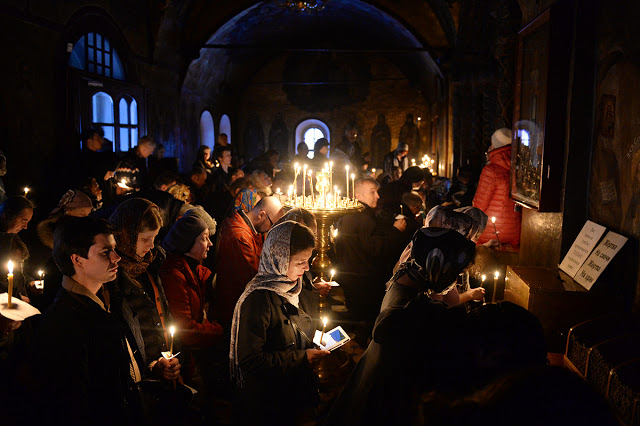 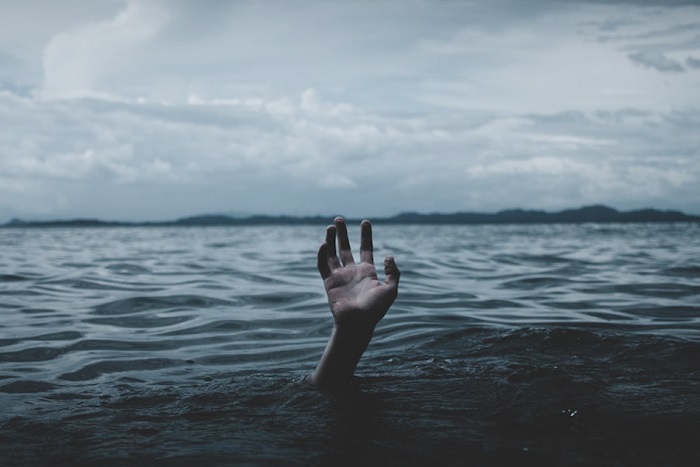