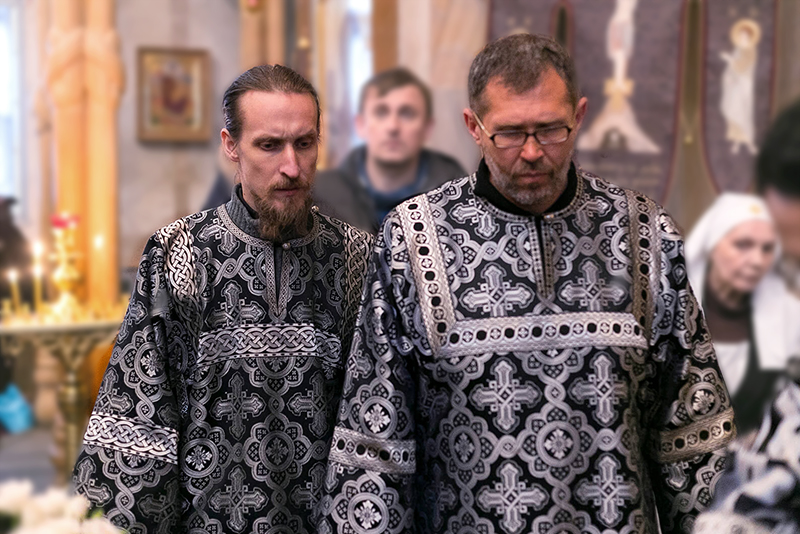 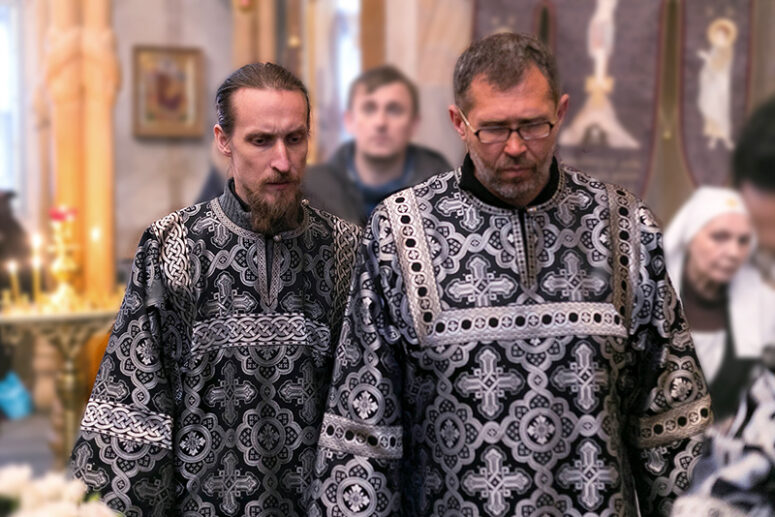 How might Newton have influenced the liturgical tradition of the Church? The answer is not the apple. It was not the fall of the fruit of the knowledge tree on the scientist’s head. It has to do with the colours and the dispersion of white light.

As we know, Isaac Newton made fundamental discoveries in optics. His experiment in the dispersion of white light by a prism is now in most school textbooks in physics. But let us add interpretation to this knowledge by considering the usual colour range of Orthodox vestments. I expect most readers of this text will know which colours are used for which feasts. The dominant colour is white, which represents purity and perfection. However, we now know from Newton that white produces a range of other basic colours by dispersion. It is no accident then that in the Orthodox tradition that white takes the ultimate place among all the other colours, and all these other colours originate from it. In this context, the apt words of Apostle Paul from his Epistle to the Romans come to mind: “Oh, the depth of the riches of the wisdom and knowledge of God! How unsearchable his judgements, and his paths beyond tracing out! Who has known the mind of the Lord? Or who has been his counsellor? Who has ever given to God, that God should repay them? For from him and through him and for him are all things. To him be the glory forever! Amen. (Romans 11:33-36).

Just as obscurity and darkness are the absence of light, so is black akin to the absence of colour. Logically, there is a tension between its use in church worship and the Orthodox tradition. Not only is it suggested by the dispersion of light – which we have just provided as an illustrative example – but it also follows from the worship rule, which does not provide for the use of black colour in principle. Black also has an association with evil. Evil, too, is not a thing in itself, but is defined in terms of the absence of good, or rather, its deficiency or distortion. Furthermore, as the colour of mourning, black underlines the belittling of love, joy, and happiness.

You might ask how all of this applies to red, which is also ubiquitous at church during the paschal period. Admittedly, this is also a practice that became common in the 20th century. Without going too deep into history, let us consider the times of Bishop Philaret (Drozdov) and examine the evidence regarding the colours of vestments used then. As we know from one document, in 1857, His Holiness wore red only for the Matins, and for the Liturgy, the main worship, he dressed himself in white. White was also the most common colour throughout the entire bright week. As for wearing black, this was already being practised in the 19th century, although it was still far from common. We know from the records that His Holiness Philaret also wore black, but only some elements of his vestments were of this colour. At the funeral service for Alexandra Gubina, widow of a state councillor, on 2 December 1856, the bishop was wearing a white chasuble with a black veil. Bishop Philaret also wore black in other funeral services.

Today, we are also more used to seeing white during the funeral and memorial services, or Parastasa. Black is only reserved for the Great Lent, especially for the first and passion weeks, and sometimes for all weekdays throughout the Great Lent. Having discussed the historical records regarding Bishop Philaret of Moscow, let us find out what the Typikon has to say on the colours of the vestments. Incidentally, only two are mentioned there. One refers to the worship service on Easter Saturday. At the end of the instructions on the reading of the Apostles and before those about the Gospel Reading, we find the following note: “Immediately following this, the priest and the deacons change into the vestments of white colour.” Another relevant fragment is found in the commentaries preceding the start of the paschal service. “The Chief Priest enters the Holy Altar with the priests and deacons, changes into a bright vestment and passes the candles to the priests and deacons.” As we see, both fragments talk only about the colours to be worn for feasts, and black is not among them. In the latter fragment, we find some indirect evidence that might be relevant to this discussion. The reference to a bright colour indicates that during lent, darker and paler hues were preferred, consistent with historical practice. Today, the wearing of purple is perhaps one of the most reasonable ways to continue this tradition.

Bishop Athanasios (Sakharov) gives two reasons for the lack of definitive rules on the colours of the liturgical vestments in the Typikon. First, it is just not practical to govern in every detail the colours to be worn; it is also unnecessary, there may be individual preferences in every parish regarding vestment colours, and different considerations, such as budget limitations. The second reason – and Athanasios underlines it especially – is that the churchgoers and the priests who read the Typikon conscientiously and seek to follow it not only in the letter but also in the spirit will always be in a position to interpret appropriately the church tradition decide unmistakably which colours would connect the most with the spirit of a feast.

In his writings, Bishop Athanasios also supports the argument that for a long time black colour remained outside the Orthodox worship tradition. In these observations, he refers mostly to funeral services, and not to Lenten worship. As Bishop Athanasios asserts, the garments of the darker and paler colours were commonly used in church worship in the ancient history of Russian Orthodoxy. Furthermore, as we pray for those who died with the hope of resurrection, wearing white is more consistent with its purpose. “Furthermore, white or bright colour will be more likely than black to bring reassurance and comfort, if not consolation, to those who mourn or grieve,” concludes Bishop Athanasios.

We call the great lent a spring for our souls, and black is not compatible with this name. Certainly, repentance is the central theme of lent throughout the forty days, but repentance does not only serve to purify our spirits; more importantly, it serves to bring us back to God and return us to His bright path. Black is rarely associated anything something positive; far more often, it is concordant with despondency or despair, alien to the tradition of Christian asceticism. In substance, Easter Day for the early Christians was not just Easter Sunday, but also the two days preceding it, including Easter Friday. Victory over death would not have been possible without the suffering and crucifixion of the Saviour, the Easter of the Cross. In Ancient Russia, priests celebrated the services of the Holy week in crimson vestments to remind us of the blood that Jesus shed for us.

They did not wear black. So where did the custom of wearing black vestments come from? Again, Saint Athanasios suggests the answer: “Black came to us from the sentimental West with its secularised Christianity. Before the reign of Peter the Great, black was seldom worn even in secular life. Men for the most part wore bright coloured clothing. The custom of wearing black during mourning is a Western secular custom. Starting from the 17th century, when Russia was coming under growing influence from the West, this custom also penetrated church life, extending the notion of mourning not only to memorial services but also to the Great Lent and the days of the suffering and crucifixion of the Lord.”

I am not calling on anyone to get rid of their black vestments, but we must admit that colour has a powerful influence on our state of mind and our perception of worship and its symbols. Perhaps we should give this a thought from time to time and make whatever changes that are possible without causing a disruption, or worse still, a revolution.

Translated by The Catalogue of Good Deeds
Source: https://pravlife.org/ru/content/chto-obshchego-mezhdu-nyutonom-i-pravoslavnym-oblacheniem 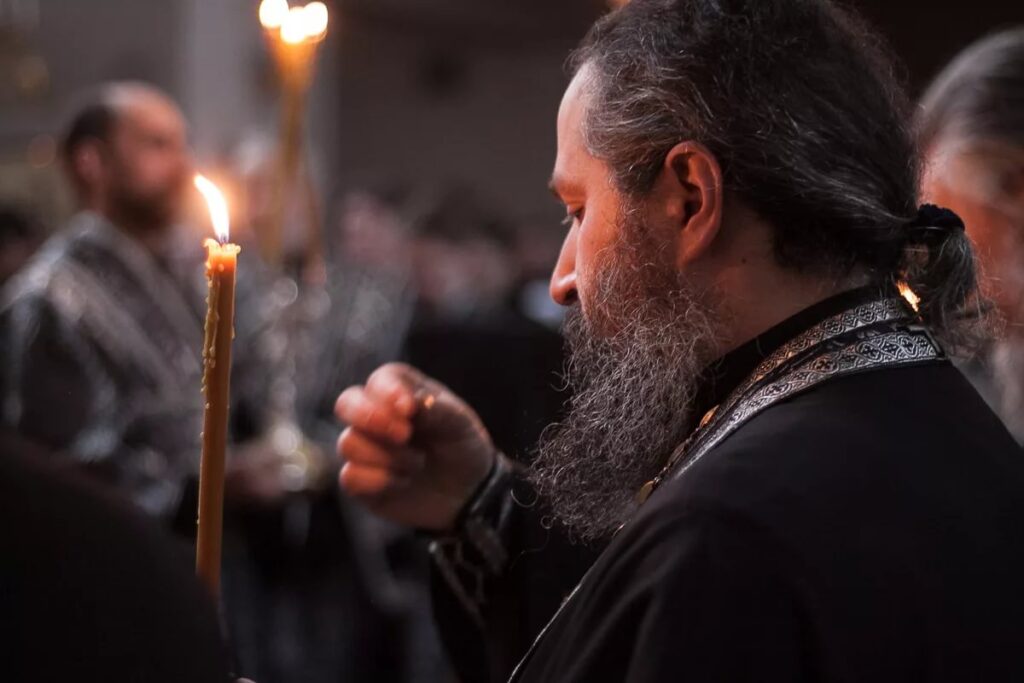 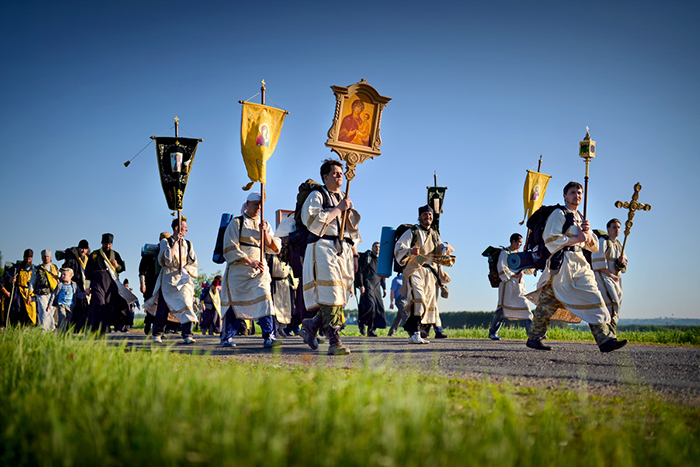