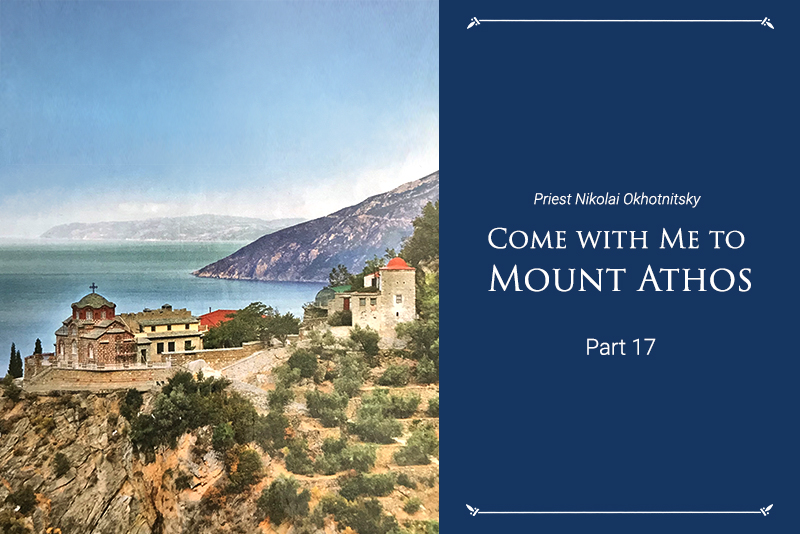 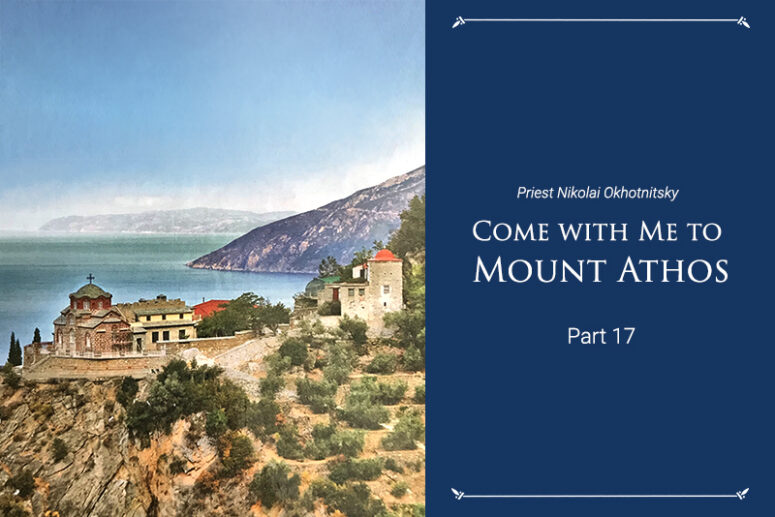 The meetings that facilitated our visit

We called in at the icon shop. Behind its counter was a friendly Greek monk with a thick black beard. He waved his hand first towards the stalls, then towards the door, telling us that he would let us into the church when we make a purchase. Almost immediately, I bought myself a Greek skullcap that I hoped would protect me from the local sun and so that we could use more time during the day for getting around. I also paid attention to the waist belts at the door with the phrase “Agios Oros” engraved on their metal buckles. Unable to resist my passion for acquisitiveness – or ‘hoarding’, as translated from Church Slavonic – I also bought one of the belts, and put it on immediately. Did I need it? I was not sure. I imagined myself wearing it around Mount Athos and them giving it as a present to a monastic in Belarus. I pictured how happy he would be to receive an object from a place as holy and prayerful as Mount Athos.

Having satisfied all of his customers, the monk from the icon shop opened the door, and we entered the church. Lord my God! We could not believe how beautiful it was. It was like being in a church back home. Many of its grace-filled icons were gifts from the Russian Tsars. Rarely does one get to see so many worship items and memorabilia gathered in one place. The monk explained to us, with some effort, that the Russian Emperor had been here in person several times. Moving around, we spent most of our time on our knees, kneeling before the great number of relics and holy images at this one church. At the end of the visit, our hearts were filled with peace and calm.

We did not want to leave. Tired from walking around the skete, we sat at the table for guests outside the icon shop. We were fascinated with the blue of the sky and the sea. One was merging into the other – there was no visible boundary between the two. As I had noticed on Mount Athos, its scenery is filled with remarkable harmony, as viewed from any angle or aspect. It was a symphony made for the eyes. Observing these remarkable views is highly therapeutic.

The monk returned with a platter. In the best traditions of local hospitality, he brought us the local treats – lucuma, cold water in glasses, small cups of strong coffee, tea and biscuits, and the local vodka. We had been on the move from the morning and had spent a fair amount of our energy. Apart from the tea at Xilurgu, we had had few opportunities for refreshments, but we were not hungry. Yet the treat from the hospitable great monk was a great blessing, and it was also tasteful and delicious. His selection of the menu was practical and far-sighted. Eighty per cent of our body mass is water, yet so many of us forget at times that plain cold water can be our most delicious and coveted drink! The local vodka made us feel our blood thin and rush upwards in our vessels. As for the coffee… Admittedly, I am far from being a coffee fan. Yet his coffee served in small cups is the delight of the angels. Its flavour was fabulous and beyond description. It took us only several minutes to restore our strength for the long and challenging journey that lay ahead. Once again, we were fit and alert, and our sense of happiness and contentment grew with every moment. Suddenly, the side door opened and a white-bearded elder came into the room. He had a radiant smile and glowed like the sun. The monk who had brought us the treats bowed to him. Immediately, he excused himself for some urgent errand. A second later, he re-emerged in a few seconds at the opposite side of the courtyard. I am not exaggerating – that was exactly how it looked. The elder came up to us to say something infinitely warm and cordial in Greek. Looking kindly into my eyes, he asked me the single question I understood,

He patted me on my cheek, to my great joy.

and put his hand gently on my shoulder. He talked, and he inspired us a lot. He asked about Putin and Lukashenko. We understood what he was saying from the smile on his face and the sound of the names. We missed most of what he said, because he was speaking Greek, the language of angels that we had not had a chance to learn, unfortunately. We knew that he approved of our plans to reach Pantocrator Monastery. But he also seemed to agree with the novice that going to Vatopedi monastery was not a good idea, because there was no road there. I dismissed his concerns, assuming that he did not know the way. We knew we needed to get there by all means.

The elder left, and a group of our compatriots arrived. They came in a Jeep and brought with them the icon of Anastasia of Sirmium, Deliverer from Potions, as a gift to the skete from Philaret, Metropolitan of Belarus. I met them at the consecration of a church in a remote village of Vitebsk Region.

Incidentally, while on Mount Athos, we never sought a meeting with anyone. Yet every day of our journey, we met different people who contributed to its progress in multiple ways. We exchanged greetings and parted our ways. Our countrymen went to the church, as we continued our journey to Vatopedi. 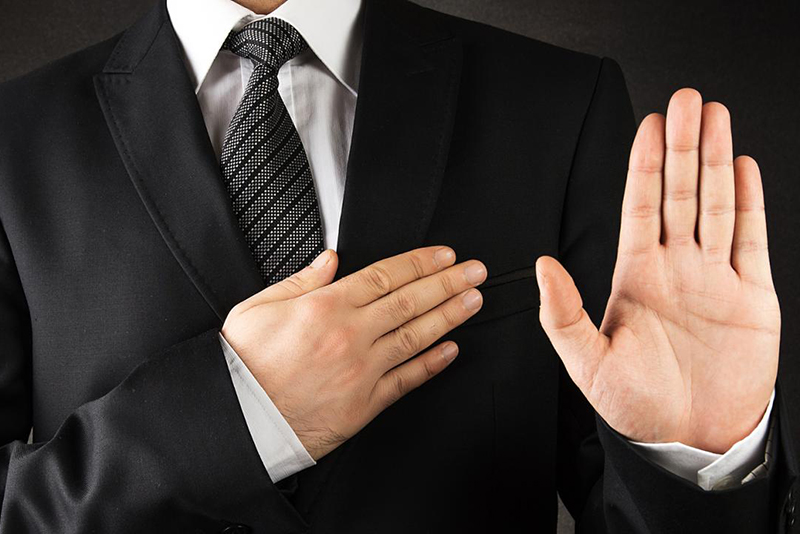 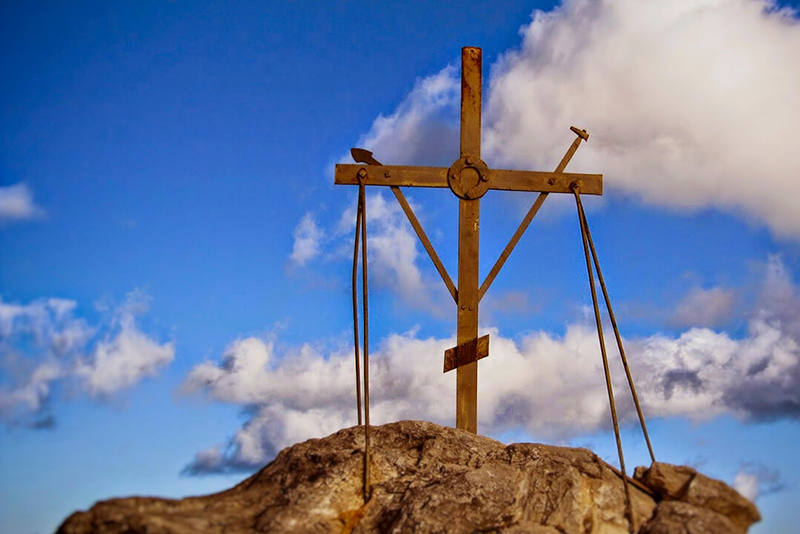 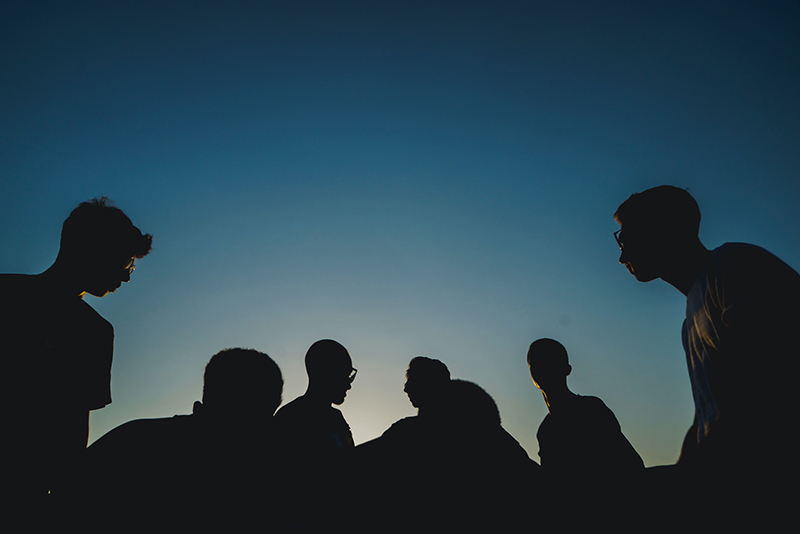